She who hears the cries of the world 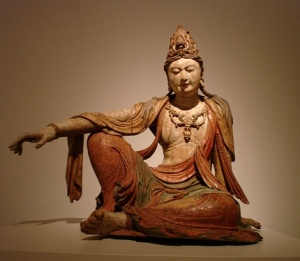 Alongside being engaged in the busy life of a Buddhist Centre, there is an inner preparation underway ready for the launch of the Buddhas in my Pocket pilgrimage next week.

I know that on this pilgrimage  Kuan Yin, a bodhisattva of compassion will be a pivotal support.

I find the royal ease pose of these statues very beautiful and evocative.

Kuan Yin came into my life in a  mysterious and magical way a few years before I was ordained into the Triratna Buddhist Order. I had gone to the Melbourne Art Gallery with the intention of seeing another buddhist statue- Ksitigarbha. However as I walked past a life size, ancient, wooden Kuan Yin I was transfixed. I am not sure how long I stood staring at this beautiful form in the glass case.

You can never really explain these experiences satisfactorily in words so I have rarely shared what happened next on that day. But something did happen that had a huge effect on my life.

An amazing, expansive light emanated from the statue and the glass case and walls of the art gallery ceased to exist. I can’t remember a sense of sound or smell, only expansive light and a deep profound peace.

This had been, up until that moment, an very ordinary day.  I had just been to the bank next to the art gallery to renegotiate my mortgage! I hadn’t been meditating or in a particularly open state.

Although I felt deeply affected by the experience I was totally unprepared to know what to do with it.

So I went on with my life and didn’t think about overtly very often.

It believe it did however stimulate an ongoing momentum to take an exploration of the Buddhist teachings further. I now knew things were not as they often seem and there was a strong flavour of freedom in that knowledge.

Sometime later I went up to a Buddhist retreat centre in Bendigo to do a solitary retreat in a nun’s hut.The young man who was the caretaker was walking me to the hut when somehow we began to talk about Kuan Yin.

I can’t remember why that discussion started and I can’t be accurate as to whether he mentioned the Kuan Yin in the art gallery first or if it was me.

But the extraordinary thing was that this man went on to describe an intense experience he and his girlfriend had in front of that statue.  And it  was exactly as I had experienced it.

He told me that as they both stood there the walls disappeared and amazing light emitted from the statue. His girlfriend was so disturbed that she was reluctant to talk about further.  But he said he felt compelled to find out more. Their relationship ended and he went off explore Buddhism further.  It had changed the course of his life.

I learnt at the time that this man was also negotiating with the art gallery to perform a puja\buddhist ritual in front of Kuan Yin. When permission was granted he invited myself and a few friends to join him. It was a delight to be able to do this.  At that time there was no magical light or unexplained experiences.

When I was ordained in 1999 I took up the practice of daily contemplation of Kuan Yin, bringing to mind her qualities of compassion and action in response to the cries of world.

So now in 2016 I am back in Melbourne and will do pilgrimage walks into the centre of the city to hand out buddhas from my pockets.  I feel very happy that I will be able to easily visit the Kuan Yin statue that generated a momentum in my life that I am deeply grateful for.

6 thoughts on “She who hears the cries of the world”