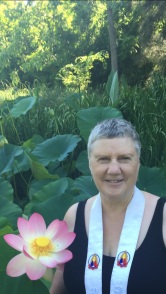 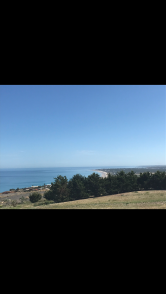 It was delightful to meet many of the Adelaide sangha on my pilgrimage visit a few weeks ago.

I had lovely catchups with people in beautiful places. I loved the lush gardens and the visits to the ocean which is so close by.

There’s nothing like walking along the ocean edge or better still bobbing up and down in the salty water, talking Dharma with people wanting to grow and be the best they can be.

The giant Kuan Yin looking out to the southern ocean reminded me of my connection with her at my Ordination nearly 18 years ago.

I led day retreats on Metta and Compassion and enjoyed meeting up with Dharmamodini , Saddhavijaya and Ratnadaka …appreciating all they are doing to share the Dharma in the lovely city of Adelaide.

Meditating on the cool, lush grass of Dharmamodini’s  retreat-like  back yard is another fond memory. Thanks for looking after me with such warm care. 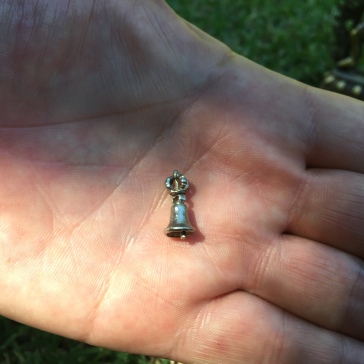 I met him in a beautiful garden in Adelaide. He was flustered and distracted.

Sometimes you don’t need to be told a whole life story to sense into a large part of it.

I sensed a strength built on a struggle and a battle being won.

It was a quiet, wise quality borne from lessons learned in hardship.

I used to see it in my brother as he described the beauty and love he found bound up in the constant effort needed not to slip into oblivion.

It’s a fragile, softening space in which to connect with someone.

So I sat with this man on the soft green grass and as he already knew something of the Buddha’s teachings I invited him to choose a Buddha from my little bag.

He told me later his eyes weren’t initially drawn to look at the Buddhas as he was transfixed by the sound of silent laughter as soon as I laid them out.

And then the sound of a bell drew him to the tiny vajra bell almost hidden amongst the Buddhas.

I encouraged him to pick up it up.

As he held the tiny vajra bell in his palm we talked about the connection with Buddha Vajrasattva and the association with purification. The handle of the bell is usually made up from part of a vajra- the diamond thunderbolt.

He said he felt he was going through a transformative time and the energy required for that was like the heat and pressure needed to form a diamond.

He told me one of his strengths was knowing that the journey was the destination.

We sat in silence together until he told me the bell sound had now been drowned out by a lion’s roar.

The lion’s roar brought him completely into the present moment he said.

‘I’m fully here now,’ he said with a broad grin.

So we sat on, ‘fully here’ together.

I noticed her sitting cross legged, with the daily paper unfolded in front of her, on one of the raised seats under a shady tree in Rundle Mall, Adelaide, South Australia.

I moved to sit quietly beside her. She turned and smiled and we started conversation.
Within a few minutes I took out my bag of little Buddhas and told her I was giving away gifts given to me by people all around the world.
She turned her body towards the array of little Buddhas as I stood them to attention.
‘Cool!’ she exclaimed.
‘Would you like to choose one? ‘
‘Sure,’ she replied.
She looked at 2 or 3 quite closely and was keen to know who had donated them and which country each person was from.
She carefully chose a solid earth touching Buddha.
She liked the fact it was so surprisingly weighty for such a little thing. We talked about the significance that could be held in small items and even in small actions.
“You’ve made my day. ” she grinned, as the little Buddha looked more and more at home in the palm of her hand.
As we chatted it was revealed that even though she lived 8 kms away from the Mall she made the trip in three times a week so she could deliver random acts of compliments to people passing by.
This was a woman who had discovered the power of the gift of kindness.
Occasionally she experienced a hostile reaction she said, but largely people stopped and engaged happily with her when she told them she liked what they were wearing- maybe a bright shirt or pretty skirt.
Her smile broadened as she shared,
” The newspaper is just a prop, love. I am never really reading it. Just biding my time until I get the urge to jump in with a compliment to someone passing by. I always go home uplifted after my days sitting here. I’m not one for communicating on Facebook. I prefer to connect with real people even if I don’t know anything about them.”

I share little buddhas, she shares compliments and together we shared a lovely communication with each other under a tree in Rundle Mall. 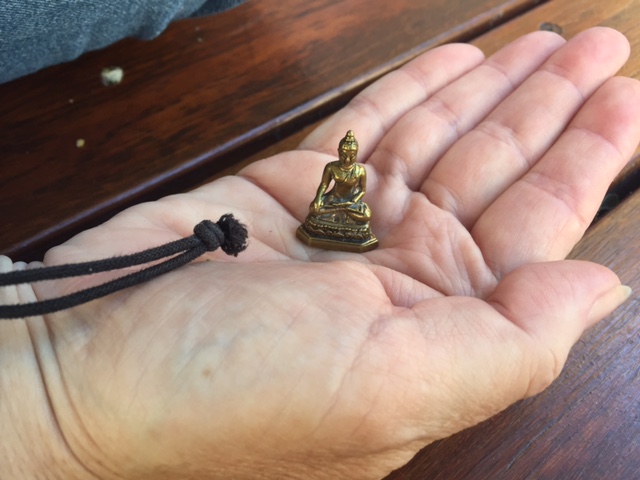