Sometimes in the West we can be uncomfortable talking about and acknowledging babies who die just before birth or during birth. There is very little in our culture that creates a space for these tender relationships to continue to be acknowledged.

However, in Japan, Ksitigarbha, known as Jizō, or Ojizō-sama as he is respectfully known, is one of the most loved of all Japanese divinities. His statues are a common sight, especially by roadsides and in graveyards. Traditionally, he is seen as the guardian of children, and in particular, children who died before their parents.

The statues can sometimes be seen wearing tiny children’s clothing or bibs, or with toys, put there by grieving parents to help their lost ones and hoping that Jizō would specially protect them.

Thus each time you see a Jizo statue, adorned with these clothes or bibs, you witness the pain of a parent.

I was given one of these little buddhas for my pilgrimage recently.

I knew I had to pass it on to someone who would deeply understand the poignant sense of connection gained by knowing others understand and are willing to be visible with such tender loss.

As this lovely young woman held this little buddha in her hand she said,

“Seeing these pictures of all the Jizos at the Japanese temples reminds me how confronting it can be for many people even to go to the children’s sections of our cemeteries.

Now I visit one regularly to honour my daughter’s place in our family.  It was only when I started going  that I realised so many people have gone through the same deep sadness that my family and I have experienced.  And in a way its comforting …knowing that you’re are not alone.

Talking to other women who had experienced losing their child was also really helpful. I could see that even though they naturally still carried the grief, their futures had unfolded and they had survived.  It allowed me to glimpse that possibility for myself.” 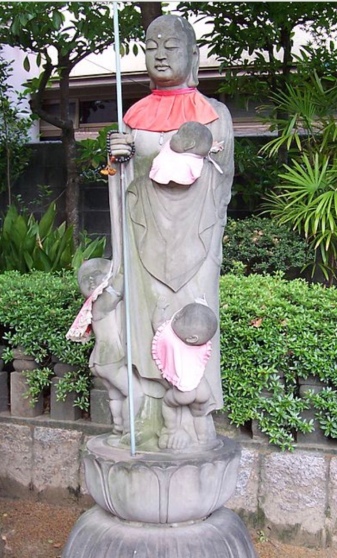 2 thoughts on “Connected through loss”