I saw him sitting on the steps of the church. Backpack and brown papered bottle, his only company. So I walked up and sat down. Pointing to the front door he offered the information, ‘They are shut. They don’t do meals today’
He told me the three days the of the week that this church provided sustenance. I wondered if my backpack had him thinking I was a traveler in need of food too.
We started a companionable dance of learning about each other with tentative questions.
I heard about his Islander/ Indigenous heritage with his birth family hailing from the Gold Coast.
He and his 3 siblings were removed from their mother. He was only 3 years old and they were all placed in separate foster homes. His was with a family in Redfern, Sydney.
His face was etched with lines that bore witness to the hard life that had unfolded over the decades.
He had such a gentle energy I found myself relaxing into his company.
He told me that once he had spent time in a prison farm and his job had been looking after the chickens. I can just imagine his smooth voice shooing them back into their pen for the night.
A family member from his clan found him decades after he had been removed from his birth home. He appreciated his half brothers efforts to look for ‘the babies that were taken.’
He seemed devoid of anger or judgment about being removed. His mum had been struggling with alcohol problems and he wasn’t sure if his life would have been better or worse had he stayed.
There was a gentle acceptance that soothed my own rising contempt for the ignorance of our early government policies. He didn’t need me to be angry on his behalf.
He came to town a few times each week from his little flat a suburb away, to sit and drink with his mates. He was having some quiet time on the steps of the church before joining them down the road.
Just before I moved on I opened up my bag of Buddhas and offered him one. He immediately chose the heaviest and largest one in the bag. He liked the feel of it he said as he slid it into his back pack. 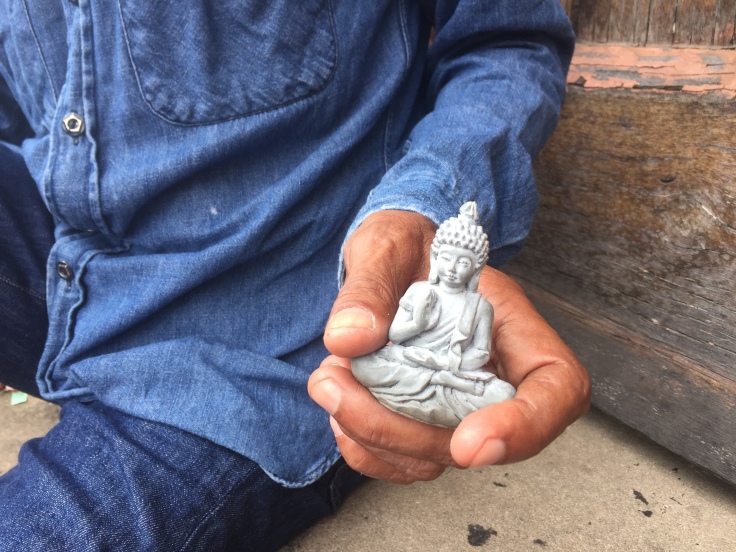