In the hands of Dantacitta

“I have had this rock for quite along time and it was given to me in America at the southern part of the Grand Canyon.  I was waiting around with about 80 other people from various tour companies for our a helicopter ride down into the Canyon.

A native American man was picking up pieces of rock off the floor.  He was just sitting there when I caught his eye and I noticed he was drawing something. He was a few metres away from me but he suddenly walked up to me and put this piece of rock in my hand. It had a picture that he had painted on it.

He said, “This is for you because you love to feel the rain on your face.”

When I looked closely at the painting at first I thought it was someone crying but then I saw that what had looked like tears actually started from the top of the head.

So in fact it was rain on the face.

And I thought, ‘How did this complete stranger know?’

Someone that I had never spoken a word to before.

How did he know that one of my favourite things to do is to actually stand out in the rain, and turn my face skywards, and let the rain just fall on my face.

It was a moment of knowing …that it’s possible to be so ‘seen’ by a complete stranger in a way we can’t even imagine.

Dharmically , it had a magical quality which I now see as something of the  Dhamma-niyama coming through. Someone that didn’t know me at all could connect deeply in quite a beautiful way.

So this gift has remained in my life as an image that represents how much I would love to be able to see people that clearly at some point in my life.” 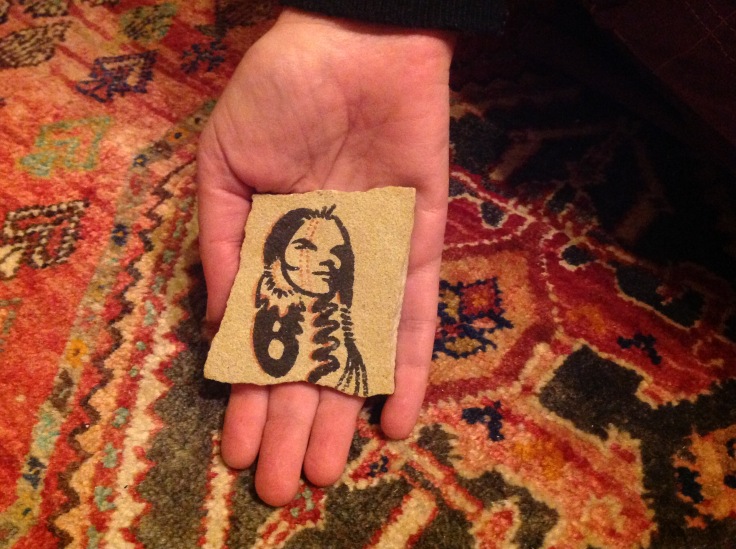